Now as jetwick stabilizes again here are some Java tweets which are easy to collect also for other topics like lucene (see below), netbeans etc:

Here are the collected tweets – did I missed some important news?

My last summary cries for another week: here you have the latest news and fun tweets.

First, a funny news from twitter.com/geekgay: Feliz Dia Do Programador! http://pt.wikipedia.org/wiki/Dia_do_Programador. Look at this wikipedia link to understand the tweet.

Now some funny tweets from today:

Subjective selected via ‘many retweets‘ at jetwick/?q=java. There is also an option to find the origin of any query, which I tried really hard for every tweet. So now I hope I always found the original author of the tweet!

You might have noticed that google is rolling out its instant search feature. Although the hype is over

I am writing here and now my thoughts about this old news enhanced with some background information gained through jetwick. First, a screenshot of google instant in action:

This search is called ‘search before you type’ – it will trigger a search from the first suggestion it gave to you and so, it can guess your intent of the query and delivering matching results faster. At least this is what google hopes. In the example google will get wikipedia from the suggestion and trigger a ‘wikipedia’ search instantaneous.

‘Search as you type’ or ‘incremental search’ is an old idea and not really useful for web content, I think. Even google implemented this some months ago for other products – that idea also contains a bit of the new ‘search before you type’ feature.

Watch it in fullscreen, please 🙂

or via Bing API from Long Zheng:

(And there is a video of the officials from Bing too, showcasting its ‘new’ stuff)
The main difference is now that only the google-leads takes the risk to deploy this feature to its main site in all countries! BTW I’m sure: if it does not work as expected for the users or SEOs, google will remove it (or un-default it) after a certain time interval.

But maybe this big change is not so big as google hopes and not so many users will use this feature (you can turn it off) or weren’t affected because they are already using scroogle or their browser’s searchbox. My guess is that ‘google instant’ was and is a really nice and brave marketing campaign: a lot of news appeared about this feature in the last week. Even ‘old school’ newspapers like zeit.de or our local one had a whole site for it (and humph, yes, I am making indirectly advertising too for them now :-/). So without any additional dollars google polished its image a bit after being wrinkled in the last weeks (Network neutrality, street view here and there in Germany, …).

The performance of google’s implementation is really great. No, only one word is necessary: fantastic! I know, that must be that hardest part of the whole thing and that’s why they roll it out partially.

BUT: I don’t like to be interrupted while typing. And displaying new results again and again are definitely an interruption. It’s a nice way to advertise similar sounding terms or for people wasting their time with browsing or searching for things. For me this means that I’ll see the stackoverflow site after 6 characters instead of 13 + ENTER. For me this is not a big benefit – I’m fast at typing – and it doesn’t weight out the disruption (ok, I’m using scroogle in my firefox searchbox, but thats another topic). So, I prefer the version of Long Zheng a lot, where you have to select the suggestions to update the results. With this version you would type 6 characters and select the suggestion – a very useful feature which I am missing at google! I like it that much that I implemented it for jetwick.

Another design issue with google’s instant search feature is the following. To see all results – including the first – the results have to be displayed below the suggestions. Compare this to the normal search where the suggestions overlap the first result(s). The problem now is that the number of suggestions will vary – depending on the query and as a consequence the results are moving up and down. The Yahoo and Long Zheng’s solution mentioned above, solved this easily: they put the search box on the left and the results on the right. I’m not sure if this is the best solution because the search terms sometimes can be lengthy, but its better than google solution.

At the end I am curious about three things:

Chrome will implement the same feature.

Bing is a decision engine.

If you live in New Zealand or have friends there, I really hope no one was damaged!

Twitter made me aware that there was an earthquake. A quick search in my twitter search prototype jetwick shows where it happened: 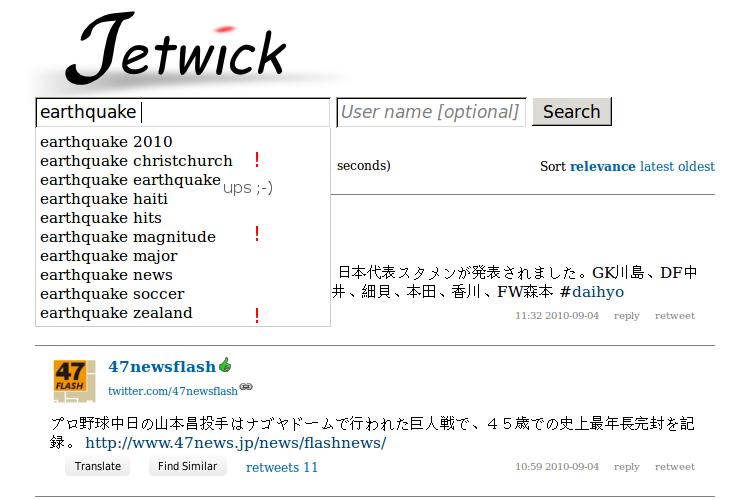 (The auto-suggestions were implemented with wicket’s autocomplete and a nice trick in solr.)

This is a short blog post triggered by this post from Jonathan Giles. It is more a list of plugins I consider than what others should consider. But hopefully at least one plugin of interests is in the list. Feel free to comment, add your own favplug.

Read here for more. For me this was only a 100 rep downgrade. The major problem is that I cannot login with wordpress-openid anymore:

Unable to log in with your OpenID provider:
No OpenID endpoint found.

I read on the German heise portal that Kenai is the ‘loser’ of Oracle’s Sun-acquisition. On the project’s blog you can read this in English:

Part of this process is the phasing out of the public-facing domain used for the Project Kenai Beta site.

It is a pitty, because of the effort for the great NetBeans integration etc. Hopefully Oracle will provide such a solution for java.net!

“5. No Discrimination Against Persons or Groups
The license must not discriminate against any person or group of persons.”

And if the license must not restrict this, the distributor shouldn’t as well! Its free software and not US software! 😦

So, if they argue with US laws I have the feelings that they shouldn’t or cannot provide free software hosting any longer. Maybe they should create a server outside the US?

Or should users from the affected countries use tor or should all developers migrate to alternative free software hosting projects?

But it is nice that they allow the comments to the link above, that’s good:

afsharm on January 25th, 2010
I am an Iranian (an innocent one) and I am not responsible for what ever my government is doing. As nawwark mentioned I’ve sometimes have contributions in SF.NET projects, so why you are denying me from my own works?
It’s against freedom and against FOSS.

bones_0 on January 26th, 2010
Just for the book: I want everybody to access my projects. Beeing a Swiss product (I am Swiss citizend and resident) it’s kind of crazy they are falling under US law now… […]”
But also:
“meonkeys on January 25th, 2010
[…] maybe this will raise awareness of these laws and encourage people to get them changed

lukecrouch on January 26th, 2010
Disclaimer: SourceForge employee.
I speak for all of us here when I say we feel your pain. “Rub us the wrong way” is the nicest possible term for it – very diplomatic on Lee’s part. I host projects here on SourceForge too – ajaxmytop, peardbdeploy, and tangoiconsprite. So blocking these countries not only goes against the free flow of information, but it cuts down my potential audience and collaborators; not to mention that it removes hundreds of thousands of ad impressions from the business!
But at the end of the day, I’m a 20-something web developer with a wife and kid to feed and I have the amazing chance to do that AND try to give my own small contributions to open-source software.  […]”

The latest changes in ubuntu will force you to update the local subversion repository. Use used the following on a 1.5 repository and it works: